Left turn on South Street… It was the beginning of the end. Because after that left turn on South Street, we were merely 3 blocks away from the end. Only 3 blocks left of a 4,000 mile, 4 month, 13 state, cross-country bicycle adventure. All of the sudden, this feeling simply overwhelms you. If there is such thing as a state of true, unaltered, pure happiness… This was it. 3 blocks of cars honking and yelling at us for taking up the entire road and only going 5 miles an hour… and for the first time on this trip, they simply didn’t exist… For those 3 blocks they weren’t even in the same universe. 3 blocks of goose bumps, teary eyes, and screaming at the top of our lungs… 3 blocks I will never forget for the rest of my life…

So before divulging the tales of the Atlantic Coast, I thought I might review some stats about the trip to catch everybody up on the adventure… This is the economics degree in me… I knew it would come in handy sooner than later!

Longest stretch with no source of water: 40 miles (Central Washington)

One pretty comical group aspect of this trip was football… Since our group came from all over, we all had different teams to pull for on Saturday and Sunday. We would usually start looking at the map on Thursday for a place to accommodate our weekend ritual. We would look for a decent size town 100 miles or so away. Next, search “sports bar” in that town. Finally, call said sports bar to confirm they would have our games on television. This was a funny conversation considering how many teams we had to watch over the course of a weekend… Lions, Bears, Titans, Browns, Ohio State, Nebraska, Michigan, and Auburn.

Now for something not so funny… Bugs. I have come to the conclusion that mosquitoes, similar to America’s older demographic, move to Florida for the winter. Well this was just fantastic for us… I got to the point where I bought a mosquito net hat; and let me tell you people… There is nothing quite like sleeping with a mosquito net hat. If you ever do fall asleep, you eventually wake up to 25 mosquitos buzzing around your face and attempting to reach your face through your netting with their evil poker mechanisms. The sound alone truly comes to haunt you.

But wait… It gets worse… How? There is an insect that inhabits the Florida Coast that reins a far worse terror upon the people than the mosquito… Sand Fleas. Also known as No-See-Ums. Also known as Flying Teeth. These evil little creatures are nearly too small to see with the naked eye and have a bite that is twice as bad as that of the mosquito. They also attack unexpectedly in waves. One night while we were camping, we were perfectly fine… until 6am. The attack was so vicious that we all awoke at the same time doing nothing short of screaming. By far the quickest we have ever packed up and hit the road. It was a race because we all knew that the last person packing up would get attacked at a level that might send a person into shock. Some of us opted to ride off in our pajamas.

Yeah let’s get straight to that story… Our last Wal-Mart campout. Long story short: They said no; we did it anyway. The mosquitoes were outrageous. I went in the store to buy deet bug spray. It was so hot that I sweated the deet into my eyes. I had to go back into the store to wash the deet out of my eyes due to the warning of blindness on the back of the deet bottle. A hungry possum circled us throughout the night scavenging for food getting as close as 2 feet away. It started raining. Michigan and RD went into the store at 2am to buy a tent. They only had one kid-sized tent… They both slept in it. We spent our morning in the front lobby of the store scratching our bug bites and watching it downpour rain.

WE ARE FAMOUS!!! A news crew saw us riding near West Palm Beach, FL and stopped to ask exactly what we were doing. They were really interested and set up an interview with us later that night where we were planning on ending our day. So we did the interview and eagerly awaited the news to come on. If you haven’t seen the clip, check it out, it’s on the wall of the page. It basically claims that we were all homeless living in Seattle and couldn’t get jobs due to the economy. So we just packed our bags and hit the road. Not true at all, but I must admit… makes for a pretty darn good story.

There are a total of 42 bridges in The Florida Keys. Each one jumping from one key (island) to the next. The most notable keys being Key Largo, Marathon, Islamorada, and Key West. The most notable of the 42 bridges is the longest… The Seven Mile Bridge. There is an old bridge beside the current bridge. It is strictly for walking and bicycles now. Michigan and I challenged Strider and Mama to a race to the end; us on the new bridge, they would be on the old bridge. Well Michigan and I having seen the 1994 film “True Lies” knew that Arnold Schwarzenegger blew up part of the other bridge with missiles from an F-16. When they got to the dead-end we were rolling on the ground laughing. I yelled at Strider “Didn’t you see True Lies?” He didn’t think the whole thing was very funny considering his immediate need of a bathroom in the middle of a dead end bridge.

So here I am at the end. After writing about all these experiences in the past 7 blogs… The conclusion. I guess I will start with the conclusion of those last 3 blocks I talked about earlier… We made it. I would begin to describe our time at the Southernmost Point, but words wouldn’t do justice to the happiness, sadness, and celebration that took place.

My mission statement for these adventures stands firm… Inspiration. All I can hope that these blogs accomplish is to inspire people to adventure. An adventure doesn’t have to be walking 2,200 miles or riding a bicycle 4,000 miles… It could be learning how to cook, learning how to play an instrument, running a marathon, or climbing Mt. Everest. These are all adventures if they are things that are out of your current comfort zone. Get out there.

Finally, I want to thank you. Yeah, you. Don’t look over your shoulder or think I’m talking about someone else. The biggest pleasure and honor in my life is knowing that you read and hopefully enjoy these writings. I have dedicated my life to these for the past 2 years. Stories from The Appalachian Trail and Biking from Seattle to Key West. I don’t know that I would have had the will to finish them without you. Because you put a kind of pressure on me… A good, necessary pressure. How disappointed would you be if I didn’t finish one of these adventures? I start these adventures for myself; I make sure to accomplish these adventures for you. Thank you from the bottom of my heart for keeping up.

People have been asking me “What’s next?”

I will respond to that question by saying: 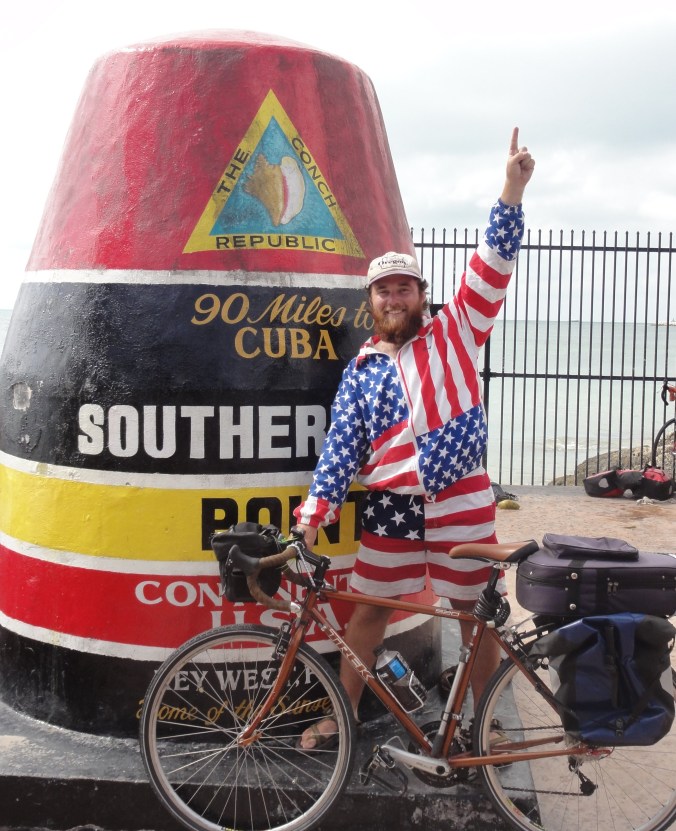