The humidity hit us like a brick wall, the accents greeted us, and for the first time on this trip the dogs chased us due to no leash laws… I made it back… The South.

All this happened within a day of crossing over from Oklahoma to Arkansas. We completed The Plains section and entered The Southeast section of this here adventure. The humidity hit us first; most likely due to there being rivers that actually have water in them. Next came a conversation at a gas station. A man was talking to me about our trip with a substantially thick accent. Michigan couldn’t understand the conversation but tried to chirp in and was completely out of context. The guy looks at me like “what did he just say?” Finally, I haven’t been chased by a single dog this entire trip because they have all been behind fences… 4 different houses worth of dogs came at me like I was a massive, T-bone steak somehow operating a bicycle.

But enough about that… I left you as I finished The Mountains section and entered The Plains section of our journey… Wow… The Plains… Really odd, unexpected portion of the great U.S. of A.

It all began with Roger… Let’s start with a disclaimer: For anyone that is sincerely concerned about my safety on this trip (like my amazingly, awesome mother)… You might want to skip this particular blog. (But really don’t skip it… I’ll be fine mom.)

Ford, Kansas. Population 153. One of those magnificent 153 citizens happened to be Roger. We’re sitting at a picnic table in town when he approaches us. Standard conversation… what we’re doing out here type thing. He loves it. “Y’all want some ground beef and potatoes?” Well yeah! He returns bearing goods, drops them on the table, and retreats to his house nearly speechless.

Mid-retreat he turns around and yells “Do you guys need to shower and do laundry?” I’m going to assume my current audience knows that we responded with a resounding “No!”… Yeah right, we smelled as rank as an Alabama chicken house in mid-July.

So after we got there I was placed in charge of cooking this particular night. I made a delectable beef, potato, corn concoction. While I was cooking Boo Boo approaches me and informs me that “it’s getting a little weird outside with Roger…” I ignore this until I step outside with the completed meal…

Roger is informing the group of his strategy to defeat God in an arm wrestling match. Roger: “I figure I got a 50/50 chance.” As someone responds “I think I’ll take God in that bet.” Roger responds with a demanding “you never bet against me.” Roger was getting nothing shy of three sheets to the wind, hammered drunk.

After what appeared to be a very loud, solo in-house party with Roger and Himself, he stumbled outside and asked us if we had seen him take his had out of his pocket. After he pointed to each of us demanding that we all respond “no”, he filled us in on his inquiry… “It’s because I never take my hand off my pistol… And it’s pretty loud from 3 feet away.” Where do you go to get freaked out by a bi-polar drunk in Ford, KS? Roger’s house. Where do you run to in Ford, KS when you feel in danger and it’s freezing cold outside? Nowhere.

We reluctantly fell asleep in the below freezing, weird situation. 1 AM: I was the only one awake. Roger says “Wake up mother f*****s!” I remained hidden in my sleeping bag. “Who stole the picture of me and my horses!!?!” I immediately felt the need to respond considering I had some insight into the picture in question… “We didn’t take your picture Roger. You showed us the picture in the kitchen and talked about them being quarter horses.” Roger: “You f*****g idiot! They are mustangs! Yeah, there’s some quarter horses in there, but they are f*****g mustangs!

He proceeds to call the cops and stares at us with a stone cold, creepy look while he goes on with the following conversation. “I need y’all to get out here… I’ve got some thiefn’ liars out here at my house… It’ll be 30 minutes??? Well I’ve got a pistol in my hand and I figure I can kill at least 3 of em’ before you get here…” Terror. Your freezing, zipped up in a mummy sleeping bag, threatening to be shot and killed by a bi-polar maniac… Real walk in the park. The cops showed up, immediately knew “Roger”, dismissed the picture thieving story, and relocated us to a safe location… I’ve never been so glad to see the sun rise.

BooBooisms: This is something pretty comical I have been keeping track of on this adventure. Most of you reading this probably feel like you know Boo Boo by now. I have done these blogs for the entirety of the Appalachian Trail and this current adventure; I met Boo Boo the first day of the AT so you could say he is a main character in these stories.

If there is anyone in our group that is a pro at talking people into letting us sleep in their backyard or living room… it’s Boo Boo. But after he reels these people into saying “yes”, he tends to ask some funny questions that make it seem like we are now interviewing that person to validate that it is in fact a good spot… It’s usually a “take what you can get” situation, but Boo Boo makes sure we get only the finest. That being said; I present to you the top BooBooisms I have witnessed:

#1: To the owner of an apple orchard that was leery to let us camp in it: “Can we start a fire?”

I’m combining this all into one due to the lack of town excellence in this portion of our journey.

So I can’t hold it back any longer… Random stories from this unlikely weird section of the adventure… Kansas and Oklahoma???

So I camped by myself for the first time on this trip. Middle of nowhere Kansas.  Got too far behind the group one day and found myself scouting out a spot behind a building after dark. As I pull up to this random shed without a house in a 2 mile radius, two hawks fly out directly over my head. They proceed to “yell” at me for the course of the entire night as if they are going to peck away at me. However, they were not to be muffled by the truly scary predator of the night… Coyotes. I’m lying there zipped up in my sleeping bag like a defenseless, enormous meat burrito… Or at least that’s how I felt about myself when I heard the coyotes slaughter a chicken within a half mile of myself.

Got my first 3 tumbleweed sightings while I was in Kansas.

We camped behind a Dollar General one night due to the kindness of Lorre the manager. The next morning she comes back to our campsite bearing gifts… Food. Rather than just splitting the food up between 7 people, we do things a little different in this group. We hold a food draft, complete with drawing broken sticks for the order of our picks… and everyone has their eyes on that cheese wiz so you better pray for the first pick of round one.

Amazingly, after the “Roger Incident of 2012” we had a string of absolute superb luck. Within a 7 day stretch we slept in a hotel 4 of those nights. We didn’t buy a single one… Just the kindness of family, complete strangers, and a church group. Good karma for dealing with Roger?

In one of those hotels, we called to request a late checkout because football was on. Our time was instantly and politely upgraded from 11am to 1 pm. At 12:45 we figured we would give it another shot. Michigan: “Hey this is room 202 and we just wanted to let you know we are going to need until 3 to pack up.” We all laugh. “No? Well how about 2…? Alright 1 o’clock it is.”

One of our funniest sleeping situations was obtained from a conversation following an excellent karaoke performance of Electric Avenue by Boo Boo. A guy offered us his old trailer. We get to this single-wide, full of junk, no electricity, and no running water. He left us with the whole place to ourselves… You’re in an interesting place in your life when you get ultra-excited about sleeping there.

We were chattin’ it up with a guy one day about Oklahoma… He informed us to be careful in Southeast Oklahoma. “If you’re an outsider down there and happen across the wrong place at the wrong time… They won’t think twice about killin’ ya and puttin’ ya in a ditch.” Keep this in mind for my last story of this blog…

When we arrived in Stillwater, Oklahoma we could instantly tell it was a top-notch Okie town. As soon as we spotted the fraternity houses we knew what had to be done. Went to the front door of the Pi Kappa Alpha house, told them our story, and proceeded to live there for 4 days… Feels good to be back in college for an extended weekend.

Rode on Route 66 for a few miles, pretty cool.

Billy & Jess: Lord knows we were going to have to meet Oklahoma’s version of Roger… Me and Boo Boo are taking a break on the side of the road as we are approached by a tiny two seat truck occupied by Billy and Jess. Billy was a 31 year old redneck from Florida; Jess was his feisty, twice married, 21 year old wife. Got to talking for a bit, they loved our story and offered to take us to see a buffalo range. We throw our bikes in the back and all 4 of us cram into the cab of this 2 seat, stick shift truck. After the buffalo, we were off to see a lake and swim. We were having a great time, it was getting late, and they decide we should just head back to their house for a bonfire… Sure! Why not? Well after 15 miles of dirt roads, 15 Busch Lites for Billy, and multiple pee breaks we are informed that we getting close to the house…

This is when Billy decides to inform us that he is a family man. A family man in the sense of taking care of his families’ problems… Billy: “Let’s just put it this way boys… I’ve got… What do you think babe… 25? Maybe 26 bodies hidden in a well not too far from here…” He ended up smoking us up some brisket and Jess whipped up some excellent potato salad…

Corn, Coyotes, and Killers… The Plains. I can safely say I got a healthy dose of Kansas and Oklahoma. Not sure I will ever set up shop there…

This blog is dedicated to our buddy Breezy. He made it from Seattle to Denver with us where he tragically broke his arm and couldn’t continue on the trip. We miss ya bud and hope to see you in Key West… Wouldn’t be right without ya.

We are 2,461 miles into this journey. 7 states complete, 6 states to go. Back in Dixie… Be on the lookout for us in your town. Until next time… Don’t sleep at Roger’s house.

Create your own adventures! 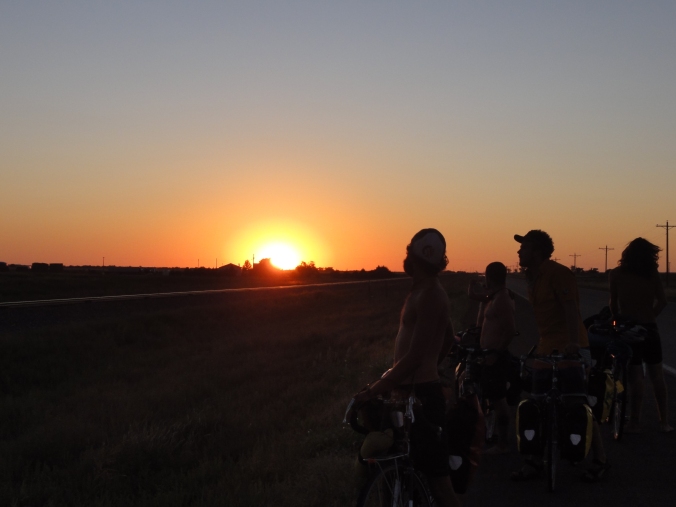